Is my brand new Hat Defective?

I can only see 3 ttyUSB connections with my ME910 attached.
What causes this?

As far as I know, there is no way to fix this other than replace the module.

Could you please share the output of the following AT command?

Below are the results

Is it possible for you to exchange my ME910C1-WW for a LE910C4-NF so I can continue to develop my product?

None of the current instructions work for the ME910C1-WW, but the Telit LE910C4-NF looks to be working with your current tutorials.

I only need this to work in The United States while I develop my system, and I have already lost 3 days of time trying to get the ME910C1-WW to function.

(I have the Raspberry Pi Cellular IoT Kit (LTE-M) Kit)

It turns out that most of the issues are related to the Sixfab SIM card not working with the connect.sixfab.com interface.

I pulled the SIM from my T-Mobile Cell Phone, put it in the Hat, rebooted everything and SMS works fine.

Knowing this, I ordered a new SIM from Twilio and will switch over to using their system.

The Telit ME910C1 module supports 2 USB configuration:
Each of them provides different PIDs 1101 and 1102,
In both cases, the number of USB ports is the same that is ttyUSB0 to ttyUSB2. 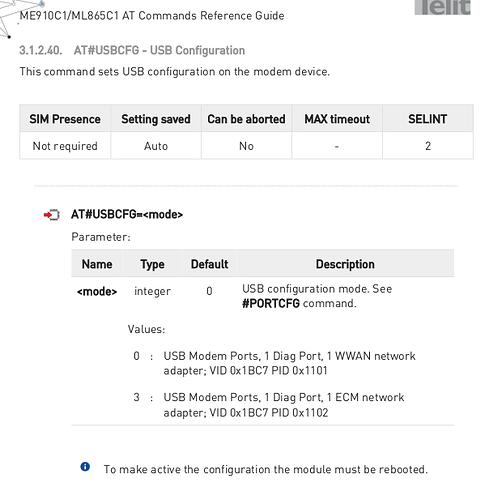 The ECM connection is pretty straightforward, The module needs to be configured to the support and desired RAT(CAT M1/NB-IoT) 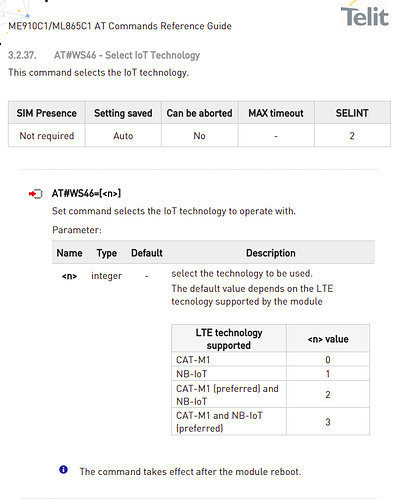 Define the APN on the SIM you are using: 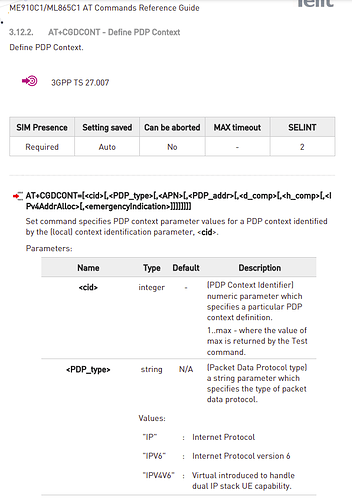 Use AT#USBCFG=3 to set the ECM mode, then reboot the module to activate the configuration.

Use AT#ECM command to activate the session. 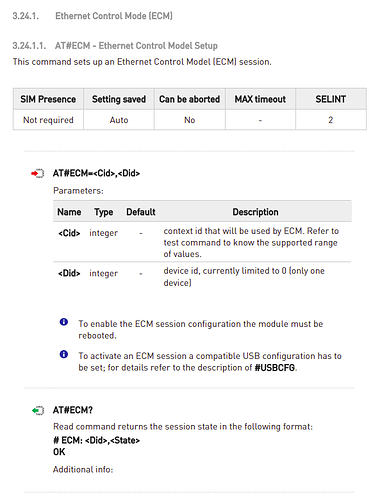 The reason for the “Unknown” LTE Active LTE Technology" error message on connect.sixfab.com is due to a bug in your system.

There are a few issues with the default settings for the Sixfab " Raspberry Pi Cellular IoT Kit (LTE-M)" Kit as currently sold.

#1 - It does not init the modem to use GSM with the ME910C1 by default as it should (At least in the USA Versions) . This causes the Modem to report as “Unknown Active LTE Technology” on your connect.sixfab.com monitoring site.
The End User needs to init GSM using AT+WS46=12 in a Miniterm session to enable GSM.

This is a more problematic issue than Sixfab is taking responsibility for, as due to this bug on your side, the end user thinks the system is not connected to any cellular system and (as has been reported) will use up their data limits thinking they are connected via some other port (eth,wlan…)

#2 - The current configuration tutorials are written for the LE910x series modems with more USB Ports than the ME910C1. This is huge issue by Sixfab, as the users end up thinking something is wrong with their systems because what they see on their monitors does not match what the “Official Sixfab” tutorials are showing them to expect.

#3 - The current installation system does not disable the failed/unimplemented IPv6 System by default.
IPv6 has been completely abandoned by most/all Cellular carriers for iot devices, and leaving it enabled causes huge delays in internet communications with the cellular systems. Traceroute/ping times are influenced by over 800% delays because of this, as are normal internet traffic.

#4 - Power draws of the Cellular Hat exceed the amperage availabilities of the current model Raspberry Pi systems, and there is no “As-Provided” way to externally power the Hat.
If a Raspberry Pi is equipped with even the most basic Official Raspberry Pi options (Modular Camera, I2C device powered by Raspberry’s 40 Pin Header, etc), the Hat overdraws the available 5VDC 3Amp Power Supply and the end user has to add an additional Non-USB-C header and power supply.

This makes development systems very problematic as there needs to be two different types of power supplies on the system. Why is there not two USB-C Ports, one for Power Only and another for communications to the Raspberry Pi?
With only one USB-C port on the Hat, no one can implement a single “wall-wart” plug with dual 3Amp outputs and have one 3Amp output running the Pi and the other running the Sixhat.

If the Sixhat had two USB-C connectors, the 2nd one could connect to the Pi for communications and not draw power from it, thus solving the amperage overdraw/low-power alarms on the Pi.