I have a Quectel EG25-G 3g/4g hat on a raspberry pi 4 2gb and I have noticed an issue where minicom will show a message “Cannot open /dev/ttyUSB2!” intermittently. Sometimes the issue will happen 10 minutes after the last time. Sometimes it will happen hours after the first time.

Most of the time I will see a “+CREG:0,0” not searching for network right before the message shows up as in the attached picture.

I do have another apn set at at+cgdcont 1, and the attm2mglobal just seems to be there always so I don’t think that message is related.

I saw some other posts about 3.3v vs 3.7v but my modem doesn’t have a way to change voltage. I also saw a post about a possible faulty capacitor on the modem too.

Has anyone seen something like this on the Quectel modems?

There has also been some discussion around modemmanager, but my pi never even had that installed so that cannot be the issue. I’m running a recent version of a raspbian image from the Raspberry Pi org site.
uname -a = Linux raspberry pi 5.15.75-v7l … 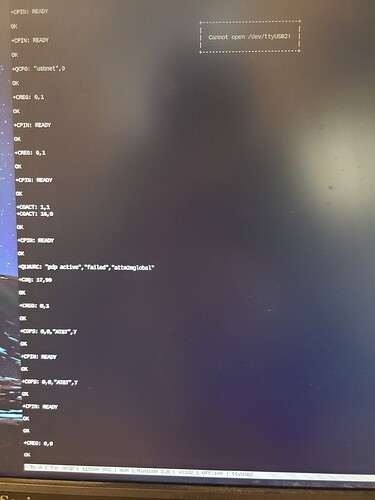